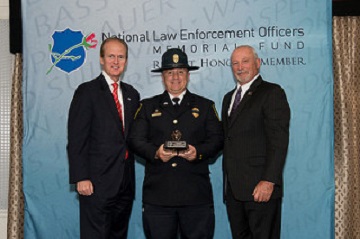 Philippi Police Chief J. W. Walters was one of over a dozen law enforcement officers nation-wide to be featured in the 2017 annual calendar of the National Law Enforcement Memorial Fund.  Walters was pictured as “Officer of the Month” for the month of October with the caption, “Chief of Police Jeffery Walters, Philippi, WV Police Department”.

The calendar citation reads, “Within three minutes of receiving a 911 call about a hostage situation at a nearby high school, Chief of Police Jeffery Walters and two other officers arrived at the scene, where 29 students and a teacher were being held at gunpoint.  After nearly four hours of expert negotiation with the 14-year old gunman through a window in the classroom door, Chief Walters secured the release of all hostages, as well as the eventual peaceful surrender of the troubled teenager.”

In the photo above, Chief Walters, holding his Officer of the Month Award in the form of a sculpted bronze adult Lion protecting its cubs, is flanked on the left by NLEOM Fund Chief Executive Officer Craig W. Floyd and by Harry Phillips, Executive Director of Law Enforcement Relations Development.  Walters was presented the award at the Annual Awards Dinner of the organization on May 14th at the Hotel Monaco, and attended a candle-light service held on the National Mall.  A Midnight Piper played for the closing ceremony at the National Law Enforcement Memorial located on E Street between 4th and 5th Streets, NW in Washington, D. C.

The National Law Enforcement Memorial is the nation’s monument to federal, state, and local law enforcement officers who have made the ultimate sacrifice for the safety and protection of our nation and its people.  It consists of two curved, 304-foot-long marble walls carved with the names of more than 20,000 officers who have been killed in the line of duty throughout U. S. history as far back as 1791.  The tree-lined memorial with its reflecting pool, was dedicated in 1991, and is visited by over a quarter million people each year.  The Officer of the Month program was created in 1996 to recognize “living legends” of the profession, of which Chief Jeffery is now considered one.