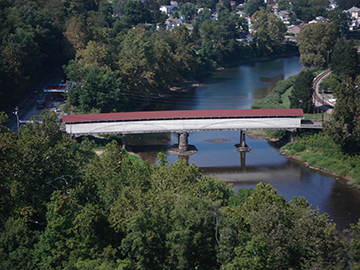 If a bridge could talk this one would speak volumes!

The Covered Bridge of Philippi is the oldest and longest one of its kind in the state of West Virginia and is one of the few surviving “double barreled” (two lane) bridges in the United States.  It measures 285 feet in length, and dates back to 1852 – just nine years prior to the start of the American Civil War.  The bridge served as a vital connection between the towns of Beverly and Fairmont by allowing the Beverly-Fairmont Turnpike to cross the Tygart River.

The Battle of Philippi was the first land battle of the Civil War.  It lasted only twenty minutes and had no casualties, but the real prize was the nearby town of Grafton where two railroads linked and allowed East-to-West supplies to move forward. The Union troops took possession of the Philippi Covered Bridge and used it for a barracks of sorts.  When the Confederate army raided the B&O Railroad in nearby Cumberland, Maryland, in 1863, Union troops attempted to burn the bridge, but southern sympathizers in the area were able to save it. The attempted destruction was the first of seven times that the historic landmark would sustain severe damage.

Lemuel Chenoweth, the bridge’s original architect, convinced the Public Board of Works to award him the contract for building the bridge by demonstrating the strength of its Burr Arch Bracing system with a model made of hickory wood.  He rested the model on the top of the backs of two opposing chairs and jumped up on top of it.  The historic landmark, like its prototype, has been a survivor and is still in use to this day.