ABU State of the University Report Given 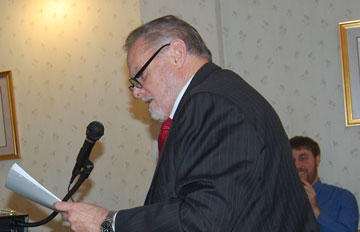 Dr. James (Tim) Barry, above, presented his annual State of the University report during the November meeting of the Barbour County Chamber of Commerce, which was attended by several members of the community.  The luncheon meeting was held at the Medallion Restaurant in Philippi.

Barry told a packed dining room that Alderson Broaddus was impacted by the same multiple issues which affect the higher education community.  He said that one of the first questions he was asked when he arrived was “what does ABU do for the local economy?”  His answer was in the form of a printed impact statement, which concluded that since 2010, ABU has had a 48.1 % increase in its economic impact, going from $ 32.6 million to $ 48.3 million, and seen a 61.9% increase in student enrollment.

The number of jobs generated in the community has seen a 61.1 % increase, from 193 to 311, he said. This fall, ABU experienced a 19% increase in the number of freshmen students, which has significantly benefitted the local community.  ABU was ranked 26th by U. S. News & World Report as one of the best regional colleges in the South and ranked fourth as the Best Value College in the South, he said.

Barry reported that ABU is in full compliance with all the requirements set by its bond holders and that the institution is applying for a loan from the U. S. Department of Agriculture. The plans for a new school of optometry will be delayed for two years, he said, and his term as president has been extended until 2020.

Reg Trefethen, Manager at the Barbour County Development Authority and President of the Chamber, said, “Alderson Broaddus University is a strong economic driver in the county and the community is supportive of the school, both economically and socially.”  Some thirty-six graduates have been employed in Barbour County since 2012 while forty-three were student teachers in the county system.