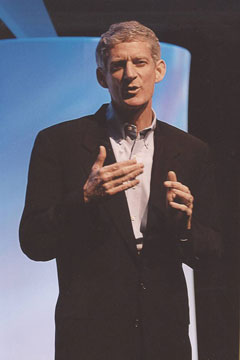 The public is invited to join in honoring McDonald’s executive John W. Ebert during the Barbour County Chamber of Commerce Annual Banquet on Thursday, May 3rd at Alderson Broaddus University.

This year’s gala will begin with an opportunity to meet Mr. Ebert during a punch-bowl reception at 6:00 O’Clock.  A sumptuous buffet dinner will start at 6:30 p.m.  Reservations are required.  Further information may be obtained by contacting the Chamber office.

Pastor Howard Swick of the Haven of Hope Church will open the evening with prayer, while Rev. Fr. James O’Connor will conclude with the benediction.  The Haven of Hope Praise Band will offer special music while dinner music on the piano key-board will be provided by well-known musical celebrity Rick Kennedy.

Annual awards will also be presented and new Chamber officers and board members elected. Future Business Leaders of American Club members from Philip Barbour High School will assist with the distribution of a range of door prizes provided by the Chamber membership.

$ 28.1 million in annual revenues, and employs some 64 people at its headquarters and 750 employees in all its locations.

Ebert serves as a Director of MVB Bank, Inc., MVB Central, Inc., and has been a Director of MVB Financial Corporation since 2013.  He earned a B. S. Degree in Accounting from Notre Dame University in 1982, was elected to the Board of Trustees of Alderson Broaddus University in 2014 and, in 2016, was presented the Al Golin Brand Trust Award, McDonald’s highest honor, for “outstanding commitment to the local community, employees, and customers.”

Ebert played varsity baseball on a scholarship for Notre Dame University for four years, has completed two marathons, and, in the last three years, nine triathlons.  He is the co-chairman of the Bridgeport 10-K Committee and, since 2012, has sponsored a math ACT preparation class attended by more than 1,600 students to improve their math scores and help qualify them for the Promise scholarship..