October 2018 Members of the Month 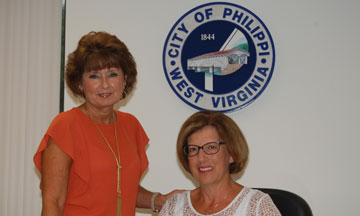 Tammy Stemple holds a Bachelor of Social Work from West Virginia University and has served for the past 21 year as the Director of Philippi Main Street.  She has also worked as the Philippi City Clerk for more than 18 years.  The Main Street program is located at Philippi City Hall, 344 South Main Street, telephone 457-3700 or check their web address at  www.philippi.org

Philippi Main Street is a non-profit, revitalization program which is part of a larger organization called Main Street America.  The program is based on four points, says Stemple: organization, design, program, and economic restructuring, intended to improve the quality of life in the community.  Program goals include preserving local history and promoting community events.  The Philippi Main Street Program was reorganized in 1997 when Stemple was appointed its Director.

“Our program relies heavily on volunteers and grassroots activities”, says Stemple.  “Reinvesting in older, historic downtown is challenging work, but our volunteers are committed to building a stronger community through preservation-based economic strategies,” she says.

“The city of Philippi provides services throughout the municipality, including electric, water, sewer, and trash pickup,” says Weaver.  “We also maintain the streets, provide street-cleaning and snow removal, and maintain a 24/7 police department.”  Philippi City Hall, at 344 South Main Street, is open Monday through Friday from 8:00 a.m. to 4:30 p.m., she said.