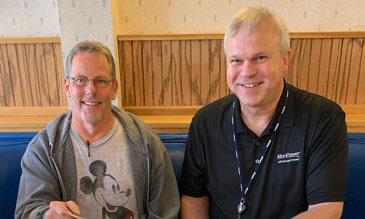 FirstEnergy Corporation and Chuck Wagon Soda are the Barbour County Chamber of Commerce Members of the Month in May.

Kevin Lyons, left, is the owner and purveyor of Chuck Wagon Soda.  Tim Pingley, right, is the Director of Regional Affairs for FirstEnergy and MonPower.

Chuck Wagon Soda was started in 2011 by Philippi entrepreneur Kevin Lyons, an Alumnus of Alderson-Broaddus College, professional magician, and cornhole enthusiast.  He expanded the business to include Snowie Shaved Ice in 2015, and in 2017 added Fruit Chiller Lemonade.  Since then he has franchised Bill’s Lemonade, an 80-calorie freshly-squeezed lemon drink.

Lyons says he enjoys meeting people and the atmosphere of the festival environment which takes him to surrounding states and as far away as New Philadephia, Ohio, Hazard, Kentucky, and the Barbecue Bash at Wise, Virginia.  He and his three employees are also available for private events.  He is regularly featured at West Virginia’s major festivals, including the Three Rivers in Fairmont, Forest Festival in Elkins, Strawberry Festival in Buckhannon, Buckwheat Festival in Kingwood, and others throughout the state.

In the summer of 1890, the Fairmont Electric Light Company began operating a 30 kW plant on the Monongahela River.  By 1900, Schmulbach brewing interests in Wheeling acquired the operation and built Fairmont’s first electric streetcar line.  The company was purchased by local businesses in 1903 which incorporated it as the Fairmont & Clarksburg Traction Company.  By 1921 the company had changed its name to the Mongahela Power & Railway Company, but by 1944 it was out of the streetcar business and in 1945 changed its name again to the Monongahela Power Company.  In 1997, Mon Power and its sister West Penn Power and PE began operating under the trade name Allegheny Power.

In 2011, Allegheny Power merged with FirstEnergy which more than doubled First Energy’s coal capacity and provided opportunity for the company to expand into new markets with a stronger, more focused competitive operation.  Today, MonPower, an Ohio corporation, is a regulated electric utility subject to the West Virginia Public Service Commission and operates an electric transmission and distribution system which, in West Virginia alone, serves almost 384,000 customers while owning and operating generation facilities.

FirstEnergy’s ten regulated distribution companies form one of the nation’s largest investor-owned electric systems which service more than six million customers in the Midwest and Mid-Atlantic regions.  Stretching from the Ohio-Indiana border to the New Jersey Shore, the ten companies operate a vast infrastructure of more than 269,000 miles of distribution lines and are dedicated to providing customers with safe, reliable, and responsible service, Pingley says.

Regional External Affairs Consultant Tim Pingley is a native of Braxton County and a graduate of Fairmont State University.  He began his career with MonPower in 1989 where he served in numerous departments within the company.  After living in Fairmont for 15 years, he moved to Vienna, West Virginia in 2005 where he currently resides with his wife Jackie and their two children Mason and Zoe.