July 2019 Members of the Month 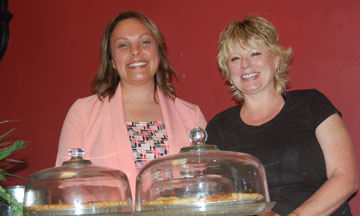 Freedom Bank and Barb’s Restaurant are the Barbour County Chamber of Commerce Members of the Month for July.

Tiffany Mitchell, left, is the Executive Assistant to the President and CEO of Freedom Bank.  Barbara Weaver is the owner of Barb’s Restaurant in Belington.

Freedom Bank, with offices in Belington, Philippi, Bridgeport, Elkins, and Buckhannon, is proud to offer checking, savings, CD’s, mortgages, and commercial, auto, and personal loans”  Mitchell says. “People who bank with us feel like part of the family.  We want our customers to be glad they chose us as their financial home,”

“It’s important to know what your bank does with your deposit dollars,” she said.  “When you deposit your money at Freedom Bank we use your dollars for mortgages in your own community.  The big banks can’t say the same.  Freedom Bank recently celebrated its 80th anniversary.  We look forward to serving the community for another 80 years and beyond.”

Mitchell is a native of Ohio and graduate of East Canton High School and the West Virginia School of Banking.  She is a member of the Community Bankers of West Virginia Leadership Development Group.  Freedom Bank’s headquarters are located at 20 North Crim Avenue in Belington, telephone (304) 823-1531, or log on to www.freedombankwv.com

Barb’s Restaurant was established in 2006 at 56 Morgantown Pike at the intersection of U. S. routes 92 and 250 in Belington.  The building itself, originally a variety of commercial outlets, was totally restored and has twice been remodeled, including a special room for private parties.

Barb’s Restaurant offers homemade bread, fresh-cut steaks, and homemade desserts along with a “huge menu selection”.  Beer in a frosted mug is also available for the asking.  “When dining here,” Barb says, “you may expect good food, a clean and cozy atmosphere, and friendly service.  I would like to take this opportunity to thank every one of our patrons for their business over the past fifteen years.”

Barbara Weaver resides in Belington with her twin daughters.  She is a graduate of Philip Barbour High School and was employed for several years at Mountain Mama’s Restaurant in Belington after which she moved to Virginia where she served as office manager for Will & Cosby Associates, and was employed at the Richmond Auto Auction and Bob Evans Restaurants.    Barb’s Restaurant’s telephone is (304) 823-1833.