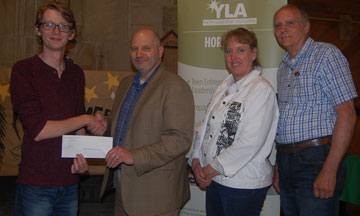 Riley Keaton, left, Program Director for Camp Horseshoe near Leadmine, West Virginia, accepted a $ 1,000 grant in support of his week-long Entrepreneurship Program from representatives of the Barbour County Chamber of Commerce

following the Mall Game during which the chamber members served as judges.  Presenting the check were attorney Hunter Mullens representing the Chamber’s Board of Directors; JoLynn Powers, the Redevelopment Coordinator from the Woodlands Development Group, a member of the Barbour Chamber; and local custom furniture and cabinet maker Mark Warner.  Not pictured is judge Don Smith from the Barbour Chamber.

High school students from ten West Virginia counties made up five teams which competed in three categories.  The Most Creative category was won by the team which established a Zen Café coffee house in the fictitious city of Horseshoe, West Virginia.  An architectural firm was judged the Best Enterprise and the business in which the judges would most likely invest.  The Best in Show category was awarded to students who created the Art Show Theatre Gallery. Student teams designed a business title, business card, billboard, social media page, press release, radio and television ads.  Each team also made a presentation for the judges at their decorated storefront location. The week-long schedule included sessions on public policy, legislative bills, the Richmond Federal Reserve and a model United Nations.  The students also visited the windmills on Mount Storm, Blackwater Falls, and several business locations in Thomas and Davis.