August 2019 Members of the Month 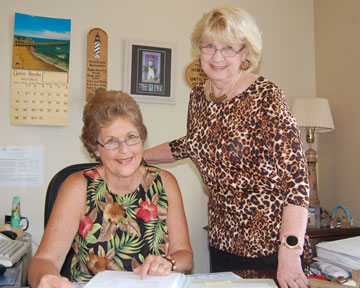 BC Bank and Shirley Keen, cosmetologist, are the Barbour County Chamber of Commerce Members of the Month in August.

Lilah Phillips, seated left, is the Vice President for Lending at BC Bank while Shirley Keen is a cosmetologist retired from Hair Techniques by Shirley.

A native of Canton, Ohio, Lilah Phillips is the Vice President for Lending at BC Bank, a full-service financial institution with branches in Philippi, Nutter Fort, Fairmont, Farmington, and Buckhannon.  The Philippi office may be reached at Post Office Box 370, Philippi, 26416 and is located is at 27 Pike Street, telephone 457-3700.

BC Bank, formerly known as the Barbour County Bank, was incorporated in 1969 and opened in 1970.  “It has always been a people’s bank”, Phillips said.  In the 45 years I have been employed there I watched the bank grow into what it is today.  We are still community-oriented, and continue to service customers in the same manner we have for the past 49 years.”

“BC Bank offers consumer and commercial lending and deposit accounts with competitive rates,” she says, “and we are known as a hometown personal service bank.”  Phillips is currently Treasurer of the Philip Barbour High School Band Boosters and is the Children’s Coordinator at the Mt. Vernon United Methodist Church.