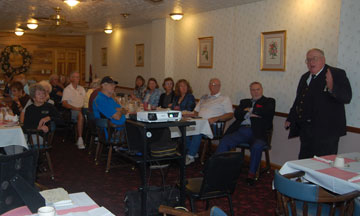 Several members of the Barbour County Chamber of Commerce and the public attended a luncheon meeting recently at the Medallion Restaurant in Philippi about the history and future of the Durbin & Greenbrier Valley Railroad.

According to Byrne, “the D&GVRR is considered one of the Top Ten tourist railroads in the United States and boarded almost 84,000 passengers in 2018.  CEO and President John Smith,” he said, “started freight service in 1998 and excursion service a year later.  The line saw major repairs in 2004 under U. S. Senator Jay Rockefeller.

“The current center of our passenger traffic,” Byrne said, “is in Elkins, which was a hub for coal transportation in 1980.  The Randolph County Development Authority took over the Elkins railyards and restored the major railroad bridge into town.  Available track in Belington dictated that location as an important storage and repair yard, although the recent acquisition by the corporation of the Cass Scenic Railroad adds additional major repair facilities.

“The acquisition of several railroads and the installation of new track enables increased accessibility from Elkins all the way to Cass, West Virginia, and allows for special trains which offer food, mystery theatre, music, entertainment, holiday express trains, and year-round freight service.  The D&GVRR is especially grateful to the city of Belington,” Byrne said, “for providing costumed volunteers and Christmas decorations annually for our popular Polar Express.”

Corporation President John Smith said that the assumption of responsibilities for the Cass Scenic Railroad has allowed for the innovative use of social media and new marketing and reservations strategies throughout the entire system. ”Young people are badly needed to train in the repair and restoration of historic railway equipment from a by-gone era,” he said.

Byrne’s report was an update of an original presentation made to the Chamber in Belington over twenty years ago.