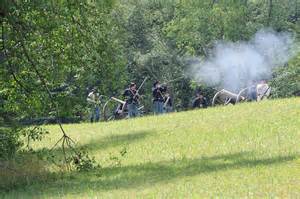 The Tygart River Valley is resplendent with history.  Perhaps it is most noted for the fact that Barbour County is the epicenter of the first land engagements between the North and South during the Civil War (1861-1865).  The Battle of Laurel Hill is among the earliest invasions, and the war saw its first general fall here; General Robert S. Garnet lost his life defending his rear guard while on retreat from Laurel Hill. His defeat at the hands of the Union General, the “Young Napoleon,” General Thomas A. Morris, resulted in West Virginia’s coming under the control of the North.  Read more about the history of the Battle of Laurel Hill.

For those who want to immerse themselves in the history of Barbour County, West Virginia, and witness the Battle of Laurel Hill, you can attend a Battle of Laurel Hill Reenactment.  These educational and awe-inspiring demonstrations allow you to “time travel”, in a sense, and experience history firsthand.  This is an incredible opportunity for young and old alike.  The battles are not a regular annual event, so be sure to check the West Virginia Department of Commerce website for further information.

The battlefield is open to the public, has public parking, and features a memorial area with a marker and flag, a pavilion, and an expansive vista of the hillside battlefield and beyond.  The battlefield is located near the Mill Creek Reservoir on Laurel Mountain Road in the community of Bellington.