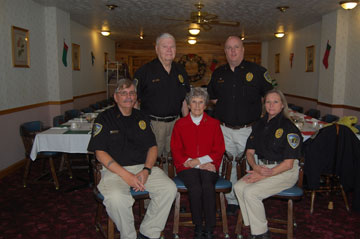 The Philippi Law Enforcement Task Force announced new officers during its annual meeting at the Medallion Restaurant on December 7th.

The Philippi Law Enforcement Task Force was formed in 1999 to provide a ready force to supplement the work of regular, sworn law enforcement officers and to provide trained personnel to assist in disaster, civil disorders, and other emergencies.  The volunteer group meets monthly for training and serves under the direction of the Philippi Police Department.

The Task Force is always interested in welcoming new volunteers, who must be West Virginia residents at least 18 years of age, hold a minimum of a G.E.D. diploma, have a valid driver’s license, and be free of a felony conviction.  Applicants are also subject to a background check by the Philippi Police Department.  Applications are available from the Police Department.

The Philippi Law Enforcement Task Force is underwritten by private and corporate contributions which provide the needed uniforms and equipment assigned without cost to each volunteer member.