March 2020 Members of the Month 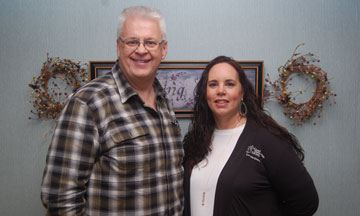 The Kines Motor Company and the Good Samaritan Society are the Barbour County Chamber of Commerce Members of the Month in March.

Jim Kines, left, is the co-owner of the Kines Motor Company.  Dionne Wagoner is the Director of the Good Samaritan Society of Barbour County.

The Good Samaritan Society uses AVERA eLongTermCare (eLTC) services as an additional option for medical providers to see long-term care residents by way of two-way audiovisual telemedicine technology.  With the help of staff members, eLTC can accurately assess the condition of a resident without the patient having to leave their room, says Wagoner.

“The Good Samaritan Society of Barbour County”, she says, “provides post-acute rehabilitation services for people of all ages who no longer need hospital care but would benefit from additional therapy before returning home.  Our Medicare-certified post-acute rehab programs feature therapy gyms, physical, occupational, and speech therapy.  Our 24-hour skilled nursing allows patients to recover in a comfortable and supportive atmosphere as they work toward their goals,” she says.  The Society may be reached at 823-2555 or go to good-sam.com/barbourcounty  The Admission Coordinator is Vickie Harris, who has been affiliated with the organization for over 31 years.

“The Kines Motor Company celebrates 77 years of Kines family history in Barbour County,” says Jim Kines.  “The Kines name has actually been part of local history for more than 100 years.  Our family operated a grist mill in Moatsville, moving at the turn of the 20th Century to Philippi, where they owned and managed a hotel, gas station, diner, and taxi service.  While operating the taxi service, the late Don Kines discovered that Ford vehicles were best suited to the road conditions in the county, so he wrote a letter to Henry Ford praising the quality of  Ford’s vehicles and requesting a Ford franchise which Don opened in downtown in 1943.”

At the request of the local farming community, Kines Motors added Ford tractors to their dealership in 1955.  Kines Motors is currently owned and operated by descendants James Kines and his son Jim, and is a full-service agricultural dealership providing new and used equipment, parts, and service to local farmers and landowners.  New equipment brands offered include New Holland, Bush Hog, and Kuhn.  “Anyone who needs a farm tractor of other agricultural equipment,” says Jim, “can contact me at (304) 457-1010 where you will recognize the family name that you know.”  Kines Motors is located at 126 McClellan Road just of U. S. 250 in Philippi.