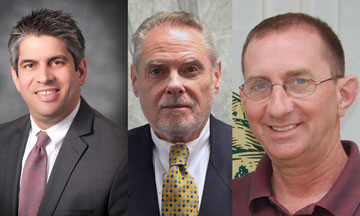 The Barbour County Chamber of Commerce has just announced changes in the status of several of its planned events.

Mike Cvechko (above, left), Chairman of the Elections Committee, stated that the anticipated Meet the Candidates Night at Philip Barbour High School, originally planned for April 23rd, has been cancelled.  A second Candidates Night, projected for next fall, is expected to go ahead as scheduled.

Dr. Tim Barry (above, center), President of the Chamber of Commerce, said that the Chamber’s Annual Banquet, originally set for May 13th at Alderson Broaddus University, would be rescheduled, with the new date to be announced when the pandemic is declared over.

Joe Kaiser (above, right), Chairman of the Barbour County Chamber of Commerce Golf Committee announced that the Annual Golf Tournament scheduled for the Barbour Country Club on May 2, 2020, has been postponed due to the current pandemic and will likely be rescheduled in the fall.  Hole sponsorships continue to be invited in order to underwrite academic scholarships presented to two Philip Barbour graduates each year.  The tournament will offer a $ 10,000 cash prize for a hole-in-one, and cash prizes for the winning team and runners-up.  Special prizes will also be awarded for the longest drive, longes putt, and closest to the pin.  A shot-gun start at 10:00 a.m. will kick off the local charity tournament.  Lunches will be provided by Broaddus Hospital, Kaiser said.