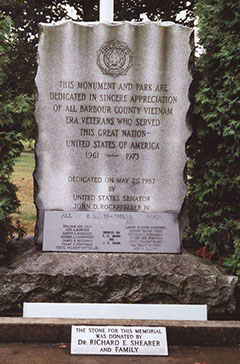 "All Gave Some - These Gave All" reads the inscription on the stone monument at the Vietnam Veterans’ Memorial in Philippi.  This memorial was dedicated in 1987, by United States Senator John D. Rockefeller and reflects the commemorative efforts of E.E. and J.R. Bryan along with Richard E. Shearer and family to honor local residents who served during the Vietnam War (1961-1973).  Inscribed on the memorial are the names of those lost to the Barbour County community-at-large.  The stone memorial stands below the mast of the United States and West Virginia flags against a backdrop of greenery.

The park is situated immediately south of the east end of the old Philippi Covered Bridge.  Built in 1852, the bridge crosses the mighty Tygart River, and provides for a serene and peaceful setting in which to visit and reflect upon our great service men and women of the Vietnam War.   At the far end of the park is a covered resting area, denoted by the stark imagery of the black and white P.O.W. flag.  There is a parking area near the memorial.  The next time you pass through Philippi, be sure to take a moment to stop and pay silent homage to our county’s heroes.