Teacher and Service Person of the Year 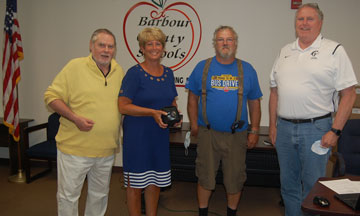 Barbour Chamber President Dr. Tim Barry, left, presented Diana Bibey with the Chamber’s Teacher of the Year Award and Kent Phillips the Service Person of the Year Award during a recent meeting of the Barbour County Board of Education attended by Superintendent of Schools Jeff Woofter, extreme right, who is a former Chamber Vice President.

An engraved glass apple was awarded to Diana Bibey, a former Mathematics Interventionist at the Junior Elementary School who saw the excitement in children who were finding new ways to solve mathematical problems.

Bibey graduated from Fairmont State University in Elementary Education and Marshall University with a Master of Science in Adult Education.  She plans to continue to promote the importance of math and STEM learning as the county’s new contracted elementary mathematics coach.

Carl “Kent” Phillips is in his 12th year of service to Barbour County schools as a school bus operator and also received an engraved glass apple.  He is known for his strong work ethic and as an unofficial mentor to new drivers.  He is a graduate of Philip Barbour High School and holds certificates in welding and electrical engineering from the Fred Eberle Technical Center.  He was formerly employed by a local service center and by the Southern States Cooperative Association.