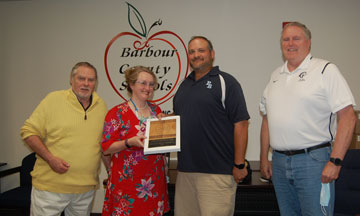 Assisting with the presentation is Jeff Woofter, extreme right, who is Superintendent of Schools and a former Vice President of the Chamber.  The lasered wood award is presented annually to members of the community who have provided meritorious service, this year in dedication to youth.

A graduate of West Virginia University, Victor Iapalucci began his school career in 1999 and, with the support of his attorney wife, Allison, maintains the legacy of the Philip Barbour High School Band as “The Pride of Barbour County." The band represents not only Barbour County but the state of West Virginia in its trips to the Bahamas, Canada, New York, Atlanta, Colonial Gettysburg, Florida’s Disneyland, St. Patrick’s Day in Chicago, and the Thanksgiving Day parade in Philadelphia.  The band was named “Grand Champion” in Sounds of the South in 2018-19.

Iapalucci’s band was named the “Honor Band” five times at the Mountain State Forest Festival, Grand Champion several times at the Strawberry Festival, and holds numerous honors from fairs and festivals throughout the state.

Allison Iapalucci, a Grafton attorney, is in charge of the band’s auxiliary and travels regularly with the band.  Together they produce “some of the best field shows anyone would ever see”, says one observer.  According to the Iapaluccis, the Pride of Barbour County is successful because of its talented and dedicated students, creative and innovative instruction, and the outstanding support received from the community.