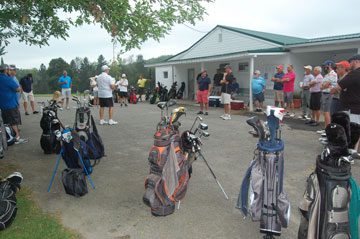 Nine teams riding brand new golf carts participated in the annual tournament at the newly-renovated Barbour course whose clubhouse and grounds were completely restored following major storm damage received several years ago.  The restoration was the happy result of countless hours of volunteer work, the assistance of the Amish community, and major cash contributions from area residents.

“Our objective of underwriting scholarships and other programs at Philip Barbour High School has been fully accomplished”, said golf chairman Reg Trefethen, pictured above at the start of play, who served as the Master of Ceremonies for the day.  Trefethen was assisted by committeemen Mike Cvechko, Eric Ruf,  and Joe Kaiser.

Prize winners included Greg Zimmerman who was closest to the pin on hole #3, Bill Bowers who had the longest putt on hole #5, and Coty Thorne who had the longest drive on hole #1.  There were no winners in the hole-in-one contest on hole #17.  The tournament committee is grateful to each of the donors, players, and volunteers, and to the personnel of the restored Barbour Country Club, for the success of this year’s charity fund-raiser.