2021 Chamber Scholars of the Year 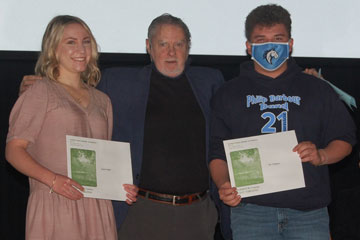 Each were presented $ 500 scholarships by the Chamber.

A resident of Belington, Payton Gregory is the daughter of Will and Crystal Gregory.  She plans to enter Pensacola Christian College for their course in nursing.  She is a member of the Faithway Baptist Church where she participates in their choir and youth groups.

Gregory has been President of the Philip Barbour Student Council, President of Colts for Christ,  and a member of the women’s soccer team and Future Business Leaders of America.  She was a Freshman Colt Character, won a third place for Young Writers, and was twice named to All-Conference and All-Region Soccer.

Alex Thompson is a native of Philippi and the son of Dorsey and Angela Thompson.  He plans to study Engineering and Physics at West Virginia Wesleyan College.  He is President of the Tacy Stickers 4-H Club and a Reporter for 4-H Teen Leaders.

Thompson is a member of the Future Business Leaders of America and was the First Horn and Co-Section Leader of the Philip Barbour High School Band’s Trumpet Section.  He holds certificates in Word and Powerpoint and earned several important awards from 4-H.