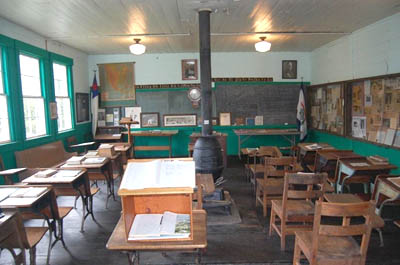 The Campbell School was built by Barbour County residents after the Civil War to ensure local children would have access to reliable and high-quality education. It was one of the first free schools in the United States, and it educated Barbour County’s children through the eighth grade. It closed in 1963 but was later restored through the joint effort of Elza and Nola Wilson.

In 1992, the Campbell School was moved to the campus of Alderson Broaddus University, a learning institution with over a century of history in the Barbour County area and a facility known for its well-established physician's assistant program. The Campbell Schoolhouse was transferred to the ABU campus due to a belief that it would be easier to maintain the preservation efforts there. It serves as a source of inspiration for campus scholars who are studying the evolution of education as well as to visitors of Barbour County who have an interest in the history of education.

Dr. Arch Hall, who performed the first open heart surgery in the United States, and Helen Reger, recipient of the West Virginia Teacher of the Year award in 1976, are just two of the students who got their educational starts in the small but practical Campbell Schoolhouse when it was in operation. Hundreds of other young people were also taught in the building.