November 2021 Members of the Month 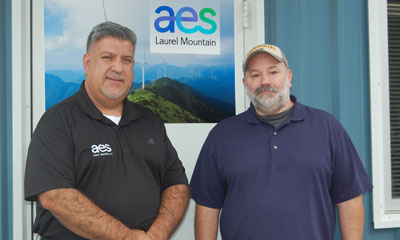 Lake’s Bookkeeping & Taxes, LLC, and AES Laurel Mountain Wind Project are the Barbour County Chamber of Commerce Members of the Month in November.

Wayne Delapas, left, is the Team Leader at AES.  Jason Lake is the owner of Lake’s Bookkeeping.

Lakes’s Bookkeeping offers accounting, tax preparation, bookkeeping, payroll, and notary services at a competitive price.  The business is owned by Jason and Sunny Lake who share over 40 years of experience.  The office is managed by Elizabeth White.  They are located at 414 Morgantown Pike in Belington, across from Stewart’s Sanitation and the public schools or write to Post Office Box 722 in Belington..  Their telephone number is (304) 823-1736.

“We are a small family-owned business,” Jason says, “which provides accounting and bookkeeping services

to many local residents and businesses, while attracting business from surrounding counties and states  We give back to our customers through donations and sponsorships, especially the youth,” he says.  “We also offer the possibility of internships at the high school and college level for students interested in the field of accounting.”

AES, whose 12.5 miles of turbines grace the Laurel Mountain ridge dividing Barbour and Randolph Counties, is undergoing a “repowering”, according to Manager Wayne Delapas.  The repowering will boost energy production by 25% and extend the life of the project by another twenty years.

AES turbines produce 97.6 megawatts of electricity but the company also utilizes a 16 megawatt battery energy storage facility to dispatch stored regulation power into the energy grid.  Battery storage, the company reports, increased 35% over the previous year, while shares in the corporation nearly doubled in the previous 5 years.  AES will provide continued local employment and tax revenue to Barbour and Randolph school districts until 2042, he said.

Although there will be no increase in the number of wind turbines, now 61, the existing turbine blades and hubs will be replaced, leaving the current height of the towers and layout unchanged,  Delapas said.  Blade length will increase by up to 23 feet. Reconstruction should be completed by November of 2022, he said.

The Laurel Mountain location has been in operation for ten years and has 13 permanent employees.  The site generates up to $ 2.5 million for the local economy and has an annual payroll of $ 1 million and produces  $600,000 in county taxes and $ 340,000 in state taxes, he said.  The company held an open house in mid-October for community members to learn more about its repowering project.