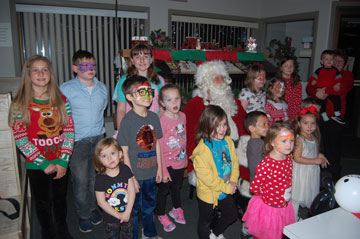 Santa Claus, pictured above with the horde of children who came out to meet him, gave individualized gifts to seventeen guests of the Barbour County Chamber of Commerce recently during its annual family Christmas Party, this year at the Laurel Mountain Inn in Belington.

Santa’s elf made each of the kids a special balloon and painted the faces of all who requested it.

Santa’s gifts were contributed by BC Bank and the Builders Center.  The Barbour Health Association underwrote Santa’s appearance and -a big hit for the evening - Tabatha the elf from PaintMisbehavin in Weston.  Table favors were provided for the 48 attendants compliments of  Freedom Bank, while 17 children were the sponsored guests of the Chamber.

The party was opened by Chamber President Dr. Tim Barry who offered prayer.  The singing of Christmas carols was led by Chamber Past President Ron Phillips who, with Lilah Phillips, assisted with the distribution of Santa’s presents.  A selection of entrees was offered at a generous rate for children and adults by the Laurel Mountain Inn.