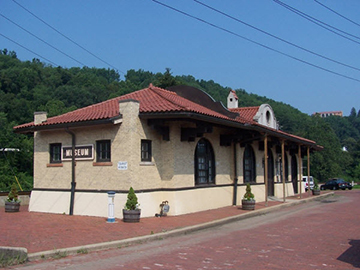 Located in a building that was constructed in 1911 and once served as the Philippi B&O Railroad station, the Barbour County Historical Museum in Philippi is a great diversion for visitors who want to know more about the area. The building is characterized by Mission Revival-style architecture and considered among one of the more unusual examples that style within West Virginia.

In addition to a collection of items that have significance to Barbour County (including Civil War artifacts), the museum holds two cadavers that were mummified in 1888 by a farmer named Graham Hamrick who had an interest in science. Intent on discovering the secrets behind the mummification methods perfected by the ancient Egyptians, Hamrick went to the West Virginia Hospital for the Insane and purchased the bodies. Before trying his methods on the cadavers, Hamrick tweaked his approach on snakes, vegetables, and even a man's head that he kept stored in a jar.

Obviously his methods worked very well, because the mummies are still well-preserved today in glass-topped wooden coffins inside the Barbour County Historical Museum. Hamrick was approached by the Smithsonian Institute and given an offer to have his mummies put on display in one of the famous Washington D.C. facilities. However, Hamrick refused to reveal his secrets. Although the mummies traveled briefly outside the state for temporary exhibitions, they are now permanently at rest in the Barbour County Historical Museum.