September Members of the Month 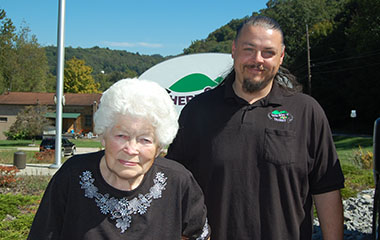 Velma Allen, a retired public school teacher, and Jerry Johnson, Operations Manager for Here and There Transit in Philippi, have been selected as the Barbour County Chamber of Commerce Members of the Month for the month of September.

Jerry Johnson is a Philippi native and graduate of Philip Barbour High School and Pierpont Community and Technical College, where he majored in Business Technology.  He earned a B. A. in Psychology and Sociology at Fairmont State University.  He was self-employed until 2012, when he joined the Barbour County Senior Center, first as an In-Person Assister, then Nutrition-Site Supervisor.  He was appointed Office Assistant in 2013.

Here and There Transit provides general public transportation services to the residents of Barbour County, says Johnson.  Non-emergency medical transport is offered in the county and to medical facilities in surrounding counties.  Demand Response service is offered as well, where the rider can reserve travel to and from his or her home to any destination within the county.  In addition, the Blue & Gray Loop is a deviated fixed route, he says, with stops at various Philippi locations on a regular hourly basis.

“Here and There Transit is committed to providing safe, courteous, and reliable transportation”, said Johnson.  “Our transit drivers are well trained, and all our vehicles are properly maintained.  Drivers are trained in passenger safety and security certification to better assist our riders,” he said.  For further information, call 457-1818 or visit the transit facility at 336 Mansfield Drive south of the Philippi by-pass.

Velma Allen is no stranger to Barbour County.  She was born in Preston County where she graduated from Fellowsville High School.  Her own education began in a one-room school #8 Sinclair.  After two years at Alderson-Broaddus College she was certified to teach Elementary Education and spent a year in the classroom.  Married, she began her 35-year teaching career after her three children were in school.  She retired in 1979.

At the age of 93, Allen is an active gardener who enjoys sewing and crocheting.  She has completed seventy large Afghans which may be found all over the United States, France and Switzerland.  Two of her “Cathedral Windows” quilts have sold for several thousand dollars.  She has given much time to lily gardening, she says, as well as perennials, magnolias, and azaleas.  She is an active member of the Philippi Lions Club, Woodmen of the World, Tacy CEO, Daughters of the American Revolution, Red Hats, and the Jerusalem Methodist Church.  Her book, “Home Among the Hills” is still available, and is set on a farm in Preston County.