February Members of the Month 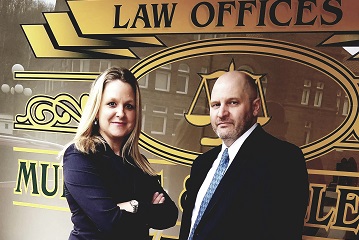 Hunter and Kate Mullens, pictured above, are the Barbour County Chamber of Commerce members of the month for February.

Mullens & Mullens, PLLC, was established in July of 2003 by Hunter Mullens and Kate Mullens (formerly McGuire) with offices in Grafton and Philippi, West Virginia.  In 2005, the firm consolidated its offices and moved to its current location, 9 North Main Street, Philippi, and in 2013 Mullens & Mullens expanded and opened a Clarksburg office, located at 333 East Main Street, Clarksburg.  The firm focuses on personal injury cases, small business representation and issues involving real estate; however, Mullens & Mullens remains a “Main Street Law Firm” with the experience, knowledge and resources to handle the simplest matters or the most complex litigation.  The partners at Mullens & Mullens bring a broad range of experience and knowledge to their practice.

Hunter Mullens is an experienced trial lawyer.  His practice is primarily focused on the representation of seriously injured people and their families, including work place and industrial injuries.  He also has extensive experience and an active practice in coal mine and gas well regulation and litigation.  He has successfully litigated jury verdicts as counsel for Plaintiffs and Defendants in civil cases seeking monetary compensation, and has also obtained successful jury verdicts for Defendants, as a private attorney, and on behalf of the State of West Virginia as an Assistant Prosecuting Attorney, in criminal cases.

Hunter is a 1988 honors graduate of Pocahontas County High School, a 1994 cum laude graduate of West Virginia University with a Bachelor of Arts in political science, and he earned his Doctorate of Jurisprudence from the West Virginia University College of Law in 1997 where he was selected as a member of the honorary Moot Court Association. He has previously been appointed and served as Assistant Prosecuting Attorney for Barbour and Taylor Counties and as City Attorney for the cities of Philippi and Grafton.  He was also previously elected by the practicing lawyers of Barbour, Taylor, Tucker, and Preston Counties to serve on the West Virginia Board of Governors (2006 to 2009).  He is a veteran of the United States Army, and among other medals, he was awarded the Army Commendation Medal during combat operations in Iraq during Operation Desert Storm.

Catherine (Kate) A. Mullens is an experienced trial lawyer and real estate attorney.  Her practice is primarily focused on the representation of seriously injured people and their families, including automobile and trucking incidents and product liability.  She also has an extensive real estate practice.

Jennifer Collier, Jennifer Whetzel and Samantha Roy provide excellent paralegal and support services for Mullens & Mullens and have a combined wealth of experience.  Mullens & Mullens can be contacted by calling 304-457-9000 or 304-623-9001.